Sunrise in Tokyo, midday heat in Texas, dusk in Berlin. Three different times of day, three different worlds – yet only one name: Heyl. The reason for the success of a family run business in Berlin, that has now spread out to the western and far eastern business world, is simple: Quality prevails! 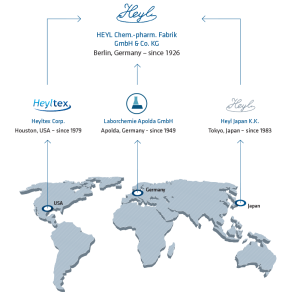 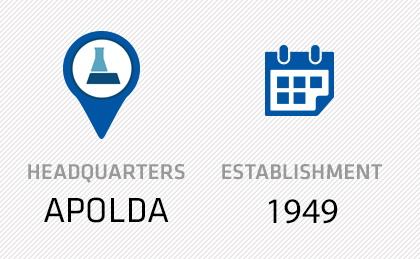 Our subsidiary Laborchemie Apolda manufactures specialty products for the chemical and pharmaceutical industry: The company, headquartered in Apolda, one of the oldest cities of Thuringia, was established in 1949 and has been a subsidiary of HEYL Chem.-pharm. Fabrik since 1993. Laborchemie Apolda is in charge of chemical procedural developments as well as custom syntheses necessary for all stages from the laboratory to production. As a result of the close collaboration with various university research institutes and research-intensive high-tech companies, all developments are based on the latest state of science and technology. 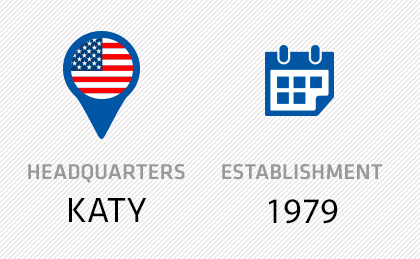 Ever since its establishment in 1979, Heyltex Corporation, headquartered in Houston, Texas, has been the basis for the commercial success of our company in the North-American market. It all started with the production of collagen and in the eighties Heyltex became Estée Lauder®’s exclusive supplier of collagen. In the nineties, Heyltex sold  Dimaval® (DMPS) all over the United States; starting in 2002, the business relationship between Heyl and Heyltex grew closer as we were applying for FDA-approval for our antidote-product Radiogardase® (Prussian blue insoluble capsules). Since 2004, Heyltex has been the lone distributor of Radiogardase® in the United States. Heyltex has expanded its portfolio with specialized consulting services and the licensing of products from other manufacturers. The experience in sales and distribution of antidotes, especially in the areas of homeland security and orphan-drugs, makes Heyltex a competent partner for national and international licensing.  Our team in the United States has close relationships with the key contacts in the USA – from the Food and Drug Administration, to ministries and research institutions, to experts in poison control centers and partners for a successful marketing of their products. Heyltex advises both small and medium-sized businesses that do not have their own presence in the US, as well as American enterprises that want to use the extensive network and the existing resources of Heyltex.

The founding of Heyl Japan Co. Ltd. as the Japanese representative of HEYL, headquartered in Tokyo, took place on 26 August, 1983. The core competencies here are also mainly in sales and distribution of finished medicinal products for the Japanese market. The most commonly known product is RADIOGARDASE®, an antidote for the radioactive poisoning from cesium and thallium.

We regret the current unavailability of the products.